So many of you may be aware of the events at the Broner vs. Maidana match last night. I’m hoping to clear up a few things for you all and set some things straight (I’ll do my fair share of speculating too, as long as no official statement has been made). 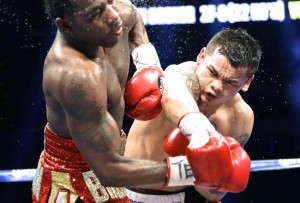 According to rules set forth by The World Boxing Union “the administration or use of drugs, injections or stimulants, either before or during a match, to any Boxer or by any Boxer is prohibited. This includes smelling salts, ammonia capsules or similar irritants. Any contestant who violates this Rule shall be subject to disqualification.” (See WBO Rule) Similar rules exist across various different boxing sanctioning bodies prohibiting the use of stimulants including smelling salts.

So, its clear that the use of smelling salts is illegal in the ring, but was that what happened last night? Well, that’s obviously not clear to anyone, but I’d like to put forth a bit of my “less biased” opinion.

UPDATE Dec 17th, 2013: Ariza has come out with an official statement saying that “of course [he did] not” slip any energizing pills or smelling salts to Marcos during the match. Like I suspected, nothing to worry about, but fun to speculate.

Here are a couple looks at what happened during the match that has brought up the contraversy in some minds:


Now, to be fair, it is perfectly plausible that the trainer was wiping his nose or face or whatever. BUT, I’d like you to take a look at a couple other videos. Watch very closely and compare Maidana’s face right after “the wipe.” To me it looks very similar. What I mean to say is that the expression on his face is very similar to other facial expressions right after smelling salts. (Sorry if some of these are bit difficult to see. Theyre only a few seconds each and I’ll update them as I find better ones.)

So another thing worth bringing up is the fact that there have been two “accusations” floating around the blogosphere related to the Maidana fight: (1) Smelling salts which we’ve already addressed, and (2) some sort of energy pill. We’ve already discussed the smelling salts to some degree, but what about something ingested? I find this far less plausible. Why? Because to my understanding most fights (especially at this level) have testing before and after to uncover any foul play such as drugs or blood doping. Any type of drugs would also take a lot longer to take effect. Why would it be administered when the fight is almost over. So many holes. I’ve even heard a few guys go as far as to say that it was some sort of brain supplement like ADHA meds. But that accusation is absolutely baseless :).

This post is sponsored by the Broner vs. Maidana WBA Welterweight World Championship Official Poster T-Shirt. Get yours today.Buy Now

Nothing Malicious At All?

Okay, so since the fight It’s become fairly clear that there were no smelling salts involved. Ariza, as tarnished as his image may be in the minds of some,  released a statement that he did not administer anything illegal to Maidana. To tell the truth, I get the feeling that most people never actually thought anything went down. My opinion tends that way as well. I use smelling salts often and I don’t see how no one would have smelled the stuff during the match. The smell is pretty distinct and even someone in the other corner catching a whiff would have been pretty obvious. 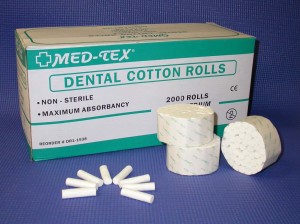 Dental Cotton Rolls Are What Was In The Napkin

If you’re interested, I think I’ve found out what it was. It’s cotton pads. Actually, it looks like those cotton rolls they shove in your mouth at the dentist. (Bad memories) 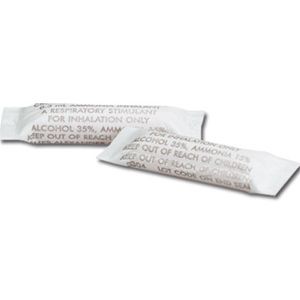 But, seriously, they look a lot like smelling salts ampules, don’t they?

Hey, the stuff works, but really doesn’t have a place where it doesn’t belong.

Please feel free to leave your own comments below. What do you think happened? Foul play or just a mistake?