Smelling salts are chemically stuffed compounds generally used to regain an alert state of mind and/or enhance performance. They are also known as ammonia inhalants. When they are opened, the ammonium carbonate found in the compound does the trick, essentially shocking your brain into alertness. Most salts are constructed in the same way some glow sticks in the sense that when they are “cracked” opened the liquid dissolves into the chemical solids thus releasing the ammonia gas. The use of these salts dates back to the 13th century, where at some point they were a must have in first aid boxes of large organizations (In more recent times organizations included The Red Cross & St. John’s Abulance). 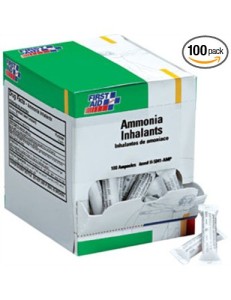 Nowadays, these salts are being used by sportsmen and women looking to enhance performance. In most sports, they have been used on those players who seem not to perform as expected. Some of the sports where these salts are used include:

This compound relies on the ‘annoying’ ammonia carbonate to cause a reflexive action which causes the muscles that control the breathing process to perform faster. This is achieved when the mucous membranes of both the nose and the lungs are irritated. In addition, the smelling salt will enhance the activities of the heart and brain by activating the sympathetic nervous system.

Using the smelling salts comes with some benefits accrued to it. This explains the reason as to why it was preferred by aid organizations and presently by athletes. Some of the benefits include:

It is said that, “all that has an advantage also has a disadvantage.” Using salts wisely can be very beneficial to performance. There is of course the need to be cautious and know what you are doing. Read the back of the package and know what effects the salts have on you before you compete using them.

It is always advisable to always seek a medically qualified personnel’s advice before trying out the smelling salts. If you plan on using smelling salts, please weigh your options wisely!